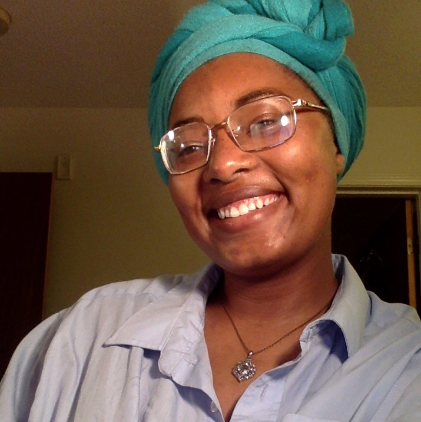 In January 2020 I became the Heavenly Groceries Coordinator, and this year I have completed about 300 hours with the Jackson Center. My role involves organizing and managing student service partners at Heavenly Groceries and on any given day I work to increase the level of social sustainability at Heavenly Groceries, because it was already pretty economically and ecologically sustainable. This is mostly done through relationship strengthening with service partners, community partners, staff, the Angels (St. Joseph CME volunteers), and farmers.

My time at the Jackson Center started in January of 2019. The center was located close to my home and on my way to the bus stop I would stop and wonder what kind of work was completed  there. That semester I took NUTR-245, a service-learning course with Dr. DeMarco, and the Jackson Center was one of the organizations we could partner with. I was excited for the opportunity but also curious about it.  Through this course I was a food partner and a service partner, and during that semester I spent about 30 hours of service at the Jackson Center. After that semester I continued volunteering and  completed about 40 hours before applying for the position I have now.

(Figure 1. Top Row: The way that surplus food usually goes directly to landfills. Bottom Row: surplus foods with food ministries such as Heavenly Groceries. Food goes from grocery stores  to those in need, to farmers if surplus who then give the needed food to their animals).

Due to COVID-19 my role changed, and I worked on a plan to distribute food resources to those who were food insecure. This required an alternate method to the way that people were receiving food while also working to ensure that we were being as safe as possible. This included new protocol where people were wearing masks and gloves and  delivering food directly to those in need.

(Figure 2. Top Row: The way that Heavenly Groceries usually operates. Overall Figure: Food leaves the grocery store goes to volunteers who distribute that food to the people in the area, then the food goes to farmers who then give their food to their animals.)

On a personal level, since January 2019 I began to love learning again because I was learning that the work I cared about wasn’t in medicine but in public health. That discovery was important because it changed the way I looked at interactions and their importance. This shift required me to relearn what I cared about, who I wanted to be, and the kind of careers that could lead me in that direction. I found time spent in the Northside refreshing because it allowed relationships to be valued as the most important thing instead of the objectives which seemed to surround me at all times in class, and that was a nice change of pace from most of my studies. Upon that conscious realization I made a choice to spend even more time enabling the Jackson Center’s  work to become a sustainable and long-term part of my life. Interacting with people in the neighborhood has allowed me to build relationships with people who I otherwise would not have met. These community members have been able to share stories with me which speak of the importance of the preservative acts of caring for your community and others. For example, the women at Heavenly Groceries embody some concepts of Black feminism through acts of caring for others and each other, storytelling, and consistent / repetitive behavior. These women aim to uplift others and themselves and due to this work, they are able to. Therefore they are increasing the public health of the community and they are educating students, like me, in the process.