This blog piece focuses on resisting the forces that are reducing affordable housing units in the neighborhoods of Northside and Pine Knolls. It features one neighbors’ story about how she came to give back to the community she grew up in.  To listen to the full interview with Ms Annie Burnette Hargett, go to the Jackson Center Oral History Trust: archive.jacksoncenter.info. 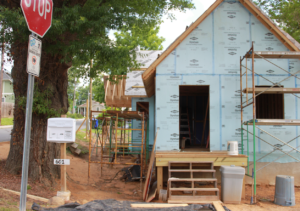 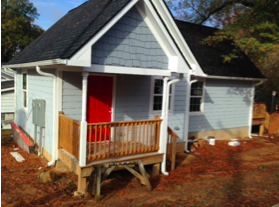 Annie Burnette Hargett and I were talking about her life growing up in segregated Chapel Hill, moving on, and coming back.

Though this was the first time we’d met, I fairly quickly discerned a clear pattern in Ms Annie’s life: she would earn or be given something, and then she would give virtually all of it away.

She grew up in Chapel Hill in the 1950s and 1960s. Her parents moved here from rural Chatham County and bought a small house in central Northside:

603 [Craig Street] is the house that we grew up in, 603. Three and a half rooms—bedroom, kitchen, and living room, … my sister and I shared a bed together. And then we had an outdoor toilet when we grew up.  … We didn’t think about—at least I didn’t think about being poor. I didn’t think about so much the racism that existed in Chapel Hill. I mean, we felt that we already had enough. There was Mr. Ben Baldwin that had a shop right up there. We had a movie theater that we went to. I mean, my mother was in charge of a base- and softball team.  She was like the street leader and any time somebody died or got sick she would go around and collect the money for them. So this was like a community. … And we had to walk to Northside [School]. We had to go across the little stream and, you know, had good days there.

Like most everyone in the neighborhood, both parents worked for the university, her father as a janitor and her mother in the laundry. She recounted with obvious pride how eventually her father landed a position as President Bill Friday’s personal assistant. “We just called him Friday’s boy,” says Ms Annie and laughs.

Her father was, above all, a clever businessman, a “spendthrift,” as Ms Annie calls him, who managed not only the family’s finances and property, but those of family members and neighbors. As she puts it:  “He just had the business acumen. It was just like a gift, I guess. God gave him a gift.”

Ms Annie left Northside after graduation and attended Winston-Salem State, an all-black college, where she felt very far away from home. As a woman, she was presented with two options there: teaching or nursing. She ruled out teaching, which left nursing, a choice that eventually led to a very successful career in education, research, and management. But none of this was obvious back then. As she tells it:

AW: Was it integrated?

AH: No, I worked as a staff nurse on the six A, which was the unit for white folks. Black folks were on 4-B. The hospital was segregated. We had to go in the basement to the cafeteria.

She returned only briefly to Chapel Hill. She had met her future husband on campus in Winston-Salem, and she married, then moved with him to Baltimore where she worked as a nurse. Annie smiles and laughs when she recalls those years: “Oh, I loved Baltimore. I just loved Baltimore.”

She earned a master’s degree in nursing at the University of Maryland, raised her two kids and ten years later returned to the Triangle to teach at NCCU. Chapel Hill was now officially desegregated, but Chapel Hill had become too expensive, and the old neighborhood as she remembered it was no more: “It was totally different. I didn’t know anybody.”

Ms Annie and her family moved to Durham instead. She still had a very direct connection to Northside, since her parents were living at 221 N. Graham Street, not far from 601 Craig where they raised their daughters. Then Ms Annie’s mother developed Alzheimer’s disease: “Every morning I came and every evening I came. And on Sundays, I would come and stay so he [her father] could go to church. So that– and he was in charge of the men’s chorus at the church down there [in Alamance County]. So for him to continue, I gave up going to church.”

Ms Annie missed her church, so she enrolled in a bible college to keep a spiritual connection and “learn more about the word of God.” Her faith sustained her and clearly informs the decisions she makes in her life.

It seems that everywhere she worked, she was able to touch people’s lives — as an inspiring teacher, a role model in the field of nursing, a path breaker in psychiatric research and a voice of dignity in workplaces often hostile towards African Americans. She was always giving.

Once her father passed, Ms Annie had to make a decision about the properties in Northside. Her childhood home sits right next to a property that originally was owned by her mother’s sister. Her father had eventually purchased this property, too. Ms Annie and her sister, Barbara, decided to sell both– 601 and 603 Craig Street, slightly under market value, to the MCJC Landbank, and thereby created affordable rental housing for people who had been homeless for years.

Ms Annie’s former childhood home was a construction site when I first saw it in Fall 2017. As I passed the house some time later, two men stood in front of it, troubleshooting and venting. They had been hired to take down the big old tree right next to the house; their crane operator had come and gone after discovering that other workmen had blocked his access. It was going to cost them, and they were frustrated. I realized from the name on one of the men’s trucks that he was also someone with ties to the neighborhood. He told me he had been a friend of Ms Annie’s sister and graduated from all-black Lincoln High in 1959, two years after she did.

Me [AW]: Isn’t it great what Ms Annie did by selling her property?

JF: You know, some people have said to me, ‘She can get more for it. She could have rented it out to students. She don’t have to rent it so cheap. She could get a lot more. But, you know, it’s good.’

AW: Yeah, two people who were homeless are going to move in.

JF: See, that’s good. It’s a good thing. But my buddy just said, ‘Why doesn’t she charge more? I mean, she should charge more.’

That’s probably what a lot of people would say. After all, why not?

Ms Annie talks a lot about her father’s larger than life personality. She calls him “an awesome, awesome man.” He spent so much of his life building a future for his family and worked tirelessly to leave something of value to Ms Annie. And so, she says, he would just kill her if she knew she was giving it away. It’s understandable that he would think so. So much is owed to those who endured Jim Crow in Chapel Hill. Ms Annie’s father did whatever he could to defy the tremendous injustices that kept blacks from owning any sort of property, and he must have felt a great deal of satisfaction knowing that he succeeded. He wanted to pass the fruits of his labor on to future generations.

But, on the other hand, it’s a great thing Ms Annie’s doing. How many others with much more wealth would do the same? The wealthy accumulate wealth by exploiting and not second-guessing the market. According to any investor, supply and demand are the arbiters of price, and not selling to the absolute highest bidder is like messing with the laws of nature. And so most people would say that someone who isn’t looking to maximize profit is either a saint or a sucker.

And yet, that’s what local activists in Northside and Pine Knolls and Rogers Road feel they have to do before it’s too late. Community leaders are open to change. But they know that market forces will undermine those who seek to preserve and renew the spirit of cooperation and neighborliness they’ve known.

Ms Annie is part of this larger struggle. Without her and other legacy sellers, the neighborhood would lose out. Something new would replace it that would be based on principles that have proven to be detrimental to diversity and lasting community connections. Neighbors would become residents; relationships would become more superficial, transient and impersonal. We know this because that’s what has happened in so many suburban and gentrified urban neighborhoods and what already has begun to happen in and around Northside.

By selling to a community-preserving organization, Ms Annie is a revolutionary as well as a mensch. Her story makes people stop and think about the price of doing business as usual. Far from resisting change, she challenges us to change the ways in which business is done for the sake of something more lasting, more worthwhile. It’s radical. But in a capitalist economy, real communities always have been. Ms Annie’s concern about what happens to her family property will insure that capitalist forces do not destroy an endangered, fragile community.

Ms Annie’s father must be smiling down on her, proud of what she is passing on, proud of her generosity and kindness, proud that she is doing well and doing good. She is a legacy seller but she isn’t throwing away her father’s legacy. She is honoring the neighborhood he loved by sharing his legacy with others.