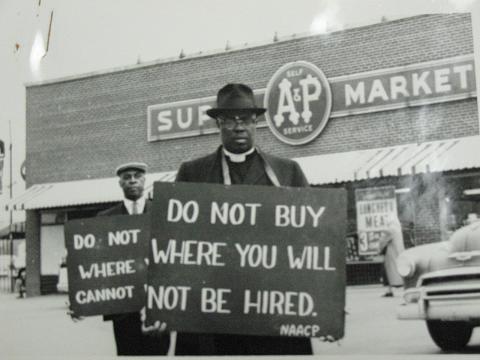 “Do Not Buy Where You Will Not Be Hired”

This photograph was found in the black attorney’s papers, Floyd McKissick. The actual date of the photograph is unknown, but it was found in a folder with other photographs from McKissick’s work with the National Association for the Advancement of Colored People and its Youth Chapter in Durham, North Carolina in the early 1960s. The individuals pictured in the photograph are also unknown.

Pictured are two African American males holding signs in front of a self service A&P Super Market. The signs say: “DO NOT BUY WHERE YOU WILL NOT BE HIRED” with a small “NAACP” in the bottom right corner. African Americans in Durham who participated in such civil rights groups often used sit-ins and boycotts to protest segregation and other unfair practices towards racial minorities. These two men in the photograph were boycotting this A&P Super Market because they were not allowed to be hired for employment due to their skin color. In order to discourage other African Americans from giving their money and business to a place that would not hire these black men, they stood out in front of the store with signs to let other blacks know of their injustices.