My name is Blanche Brown. I am a first-year student at UNC Chapel Hill, hailing from Tallahassee, Florida, and have been working at the Jackson Center as an intern since the fall. On Saturday, March 24th, a group of Civil Right leaders, university students, and staff members gathered in the Jackson Center. The meeting was prompted by the recent publication of Courage in the Moment: the Civil Rights Struggle in Chapel Hill by Jim Wallace, The Daily Tar Heel (UNC’s newspaper) photographer during the early 1960s. Many unnamed fighters in the struggle were photographed and about a year ago, the Jackson Center hosted a workshop where community members were able to identify the people featured.

James T. Foushee, a sturdy-looking man of about 60, and William Carter, a sprightly bald mustached man wearing Van’s skater checkered shoes, were two prominent leaders of the local Chapel Hill movement. Euyvonne Cotton, Linda Brown, and Keith Edwards all grew up in the Northside community during the Civil Rights movement and participated in the struggle. Marion Phillips, a tall man with a deep, ponderous voice, was a leader of the movement in Orangeburg, South Carolina. All six of them, many of whom were featured in Jim Wallace’s book, sat in a circle, broken up by the youthful faces of college students, who sat eagerly with pen and paper, waiting to hear history crack open and spill over the freshly vacuumed carpet.

One of the key questions became, “How did you get involved?”

Linda Brown followed the examples of, and drew inspiration from, her family members, especially her uncle James Brittain. “When i was old enough to march, we marched and after he left we still marched.”

Keith Edwards and Euyvonne Cotton echoed this sentiment. Mrs. Cotton reflects that it was easier for her to participate in place of her parents, whose jobs would be at stake. James Foushee and William Carter, however, asserted that they would be out there marching whether their parents approved or not.

“Were you ever afraid?”

Euyvonne Cotton recalls the scariest part: the burning of a cross in Hilliard Caldwell’s yard and walking through Carrboro where instances of pure hatred were common, like when a white man threw a snowball at her one day. This memory pulls at me. It is difficult to imagine having no other option than to keep walking because the world is not safe enough for me to speak my mind. Mrs. Cotton continues, “you can’t help but hate and feel the rage inside of you, especially when you can’t do anything about it…”

Marian Philips agrees that "there is a difference between fear and outrage. If something like your life is at stake, that’s fear, but if you are feeling emotions because an injustice is going on, that’s outrage."

Despite the fact that I chaffed when Mr. Carter called out the women for being afraid, I was honored to be hearing these stories, however fragmented and talked over they were (the atmosphere in the room buzzed and often times would erupt with a chorus of voices laughing or agreeing or correcting). There was a tangible energy in the room, even silences could be felt. What impressed me most was the moment when Euyvonne Cotton passed her copy of the book around and asked everyone to sign it. I was sitting next to her and passed the book on to William Carter, but she stopped me and insisted that I, along with all the other students, sign as well. In doing so, I became a witness for this history but more importantly i felt like it was understood that that this struggle is not over and needs the support and strength of the youth, of us college students who were sitting there that afternoon. Euyvonne Cotton wore a hoodie to the story circle in support of Trayvon Martin and said that she worried about her grandson everyday. "The injustice is still going on. Will I live to see black people come up out of this? We will have this life struggle forever.” 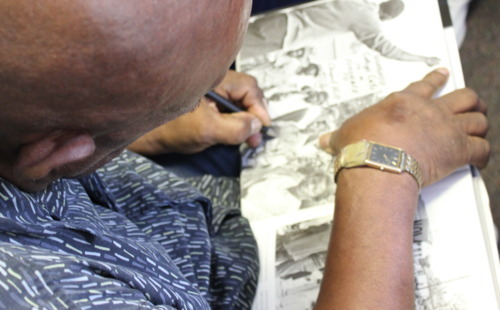