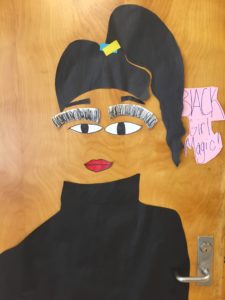 In Spring 2019, the Jackson Center was invited to lead a series of workshops for Kathryn Murchison’s African American History class. One of the most powerful developments in this class was the way students shared what it has meant for them to not have the opportunity to learn more about African Americans or, for students of color, to see themselves and their life experiences reflected in the curriculum. They talked about wanting to know more about black and brown Americans’ contributions to all areas of life and to have a much more critical discussion about the way in which (white) history is taught. As a final project, students created original pieces inspired by the oral histories they had heard. Here are some of their reflections on what an Alternative Black Curriculum (ABC) might look like and some of their final projects.

Q: What is the Alternative Black Curriculum?

“I think the Alternative Black Curriculum is getting the full history of African Americans. When you are learning about black history in an ABC program, I feel like you are learning more than the great value watered down version of history, but you are learning hands-on about black history. You are being immersed in the culture through first-hand experiences, oral histories, artwork, poems, and anything else that can represent the black culture. I believe that my project fits in the ABC because poetry is another form of oral history, and by me using an oral history and putting it into art form to be shared throughout the world to get a first experience that my person had, is truly what ABC is.”  (Kaniyah)

“ABC is the secondary curriculum that we are facing right now. It’s not a mandatory curriculum. Personally, we need to learn both sides of the curriculum. Today in American History, we learn about “White People” history. The only time we talk about black people is when we talk about slaves. We are more than slaves. My project shows the struggles they went through and the heartache.”  (Aniya)

“ABC is a curriculum that isn’t developed or made through the eyes and lens of a white person, but through the voices, stories and experiences of black people. My project fits into the curriculum because it’s not just the typical black people we learn about everyday (not saying they aren’t important). It’s people from our communities, ones we can relate to, because they are going through the same thing as us.”  (Eve)

“ABC is a way of teaching black history using alternative methods, specifically using oral history. My project fits into the ABC because it uses the stories not found in textbooks, but rather voices and a different perspective on the Reconstruction Era. I had not heard of the riots in Wilmington and the black experience in North Carolina until this year, although I grew up in North Carolina and our state even requires years of North Carolina history to be taught in elementary school.”  (Clara)

“ABC is actually telling the truth about Black history and not covering it up with WHITE history, that didn’t have anything to do with Black culture. I feel as if my project [on police brutality in today’s America] fits into the ABC because they still today are trying to cover up things happening in the Black community, such as killing innocent Black people for no apparent reason. I feel it’s very white washed with them saying the Black person was in the wrong in every situation, when obviously these police officers were in the wrong.”   (Destiny)

Based on the oral history of Kathy Atwater

I stop and think

I’m not thinking of me

I know where my home is.

Was they just fighting for the freedom

From a play they are forced to be at?

Such a little word

Kathy Atwater say her community is

She got adopted to her home

And since then she never left.

What offer will you take to

What does home mean to

I guess I should be happy

Based upon the oral history of Fred Atwater

That we had integration.

We is no longer segregated.

That now the whole town can get tipsy.

I guess I should be proud,

That Lincoln High was closed.

Even though we were once the best in town.

That now we all together,

Even though they don’t want us together.

That they didn’t have no dogs,

But instead poured ammonia and urine on us,

From the riots and fights,

To the signs that said,”Let’s keep it white.”

That our beloved Lincoln’s gone,

Even though we didn’t ask why whites couldn’t go there.

We knew all along.

That I could take the heat.

Because momma and daddy couldn’t say what they wanted,

Because their jobs allowed us to eat.

I guess I should be happy

That things are starting to change,

And maybe when I look around it all looks the same.

That my grandkids won’t be discriminated against,

Even though in their schools they won’t be represented.

Based on the oral history of Keith Edwards

What goes into a home?

I ponder this question as I listen close.

Is it a place to shelter yourself from the outside?

When the world is just too much to bear,

The racism and turmoil that engulfs every town.

Some claim there is no problem.

They are blind to the prejudice, the red-lining, the hate.

Or worse, ignoring it.

Who are you to destroy a home?

The developers take the role of

The final steps to gentrifying the neighborhood.

What’s the price you pay?

An accomplice without ever raising a finger.

You can choose not to see what is right in front of you.

But be wary that it is happening.

Soon it will eat away at your consciousness until

All that I ever hear you say any more is

A Good Time Living in Northside

Based on numerous oral histories of graduates of Lincoln High School

work, work, and work some mo’

his parents worked till they died, but they couldn’t even go see

movies at the Varsity and never really tried

living in Northside everybody knew everybody

the Wilsons lived on the other side, the Foushees lived down the street and ya can’t forget Ms. Bynum’s beautiful flower garden,

all day they would play, play, and play some mo’

playing kickball and baseball out in the field with them rock bases almost seemed real.

down at the catfish having a good ol’ time, where fighting and arguing never lasted a lifetime

everybody knew school was the most important

He never had to worry about that

back in Northside school was fun, folks was actually happy to go.

heck, the teachers cared so much

a good time living in Northside.